I wrote an article on Property Testing about a year ago. Isocpp.org even linked to it which was pretty cool. Recently, I uncovered a fantastic talk by Jessica Kerr about property testing. Kerr’s talk reinvigorated my languid research effort toward generated testing. Kerr presented the idea (novel to me) that properties aren’t rigid. Properties don’t need to exclude all possible incorrect results for a given function. Properties simply must reduce the size of the incorrect space. This may seem like semantics, but it is easier to exclude a wild-ass-guess that verify it is correct. Additionally, some domains may not have a solidly defined answer,a nd the result my be probabilistic in nature. This post will focus on deterministic problems for the moment, but realize that property testing is vastly more general than mundane example testing. How properties reduce the size of the problem space makes me imagine this Figure. 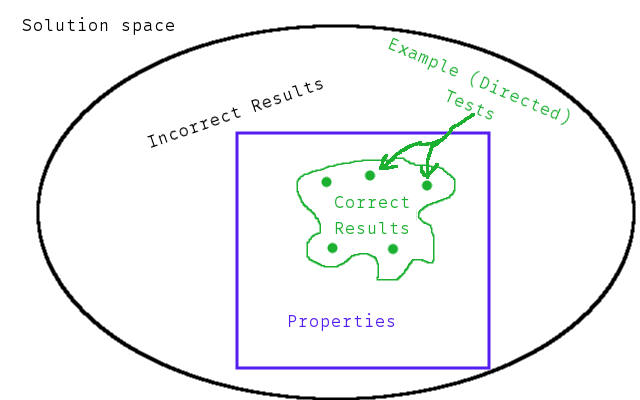 Following Kerr’s references, I found a set of projects from a predicate-logic course. This course provides 20 separate projects excellently cast for a property-driven-design tutorial. These projects are unique since besides the typical requirements they enumerate the predicate functions each requirement typifies. Predicate functions are to a predicate-logician as properties are to a computer scientist. These enumerated properties (predicates) clarified many points I misunderstood about property testing.

This post will step through the design of the first project minmax using C++. My primary goal for this article is to address a concern raised by a colleague, “Does pulling in more complexity — a fancy test generator — actually increase quality?”

In her presentation, Kerr stated, “…what is this answer? I don’t know but I can put a box around it!” This jestful statement is quite inspired. Example tests — the test typically used in unit tests (the FPGA/ASIC guys call these Directed Tests) — draw individual points within the correct region of the solution space.

There are paradigms, e.g., structured testing using McCabe complexity, for selecting effective points within this solution space, but in the end you are still drawing points. Properties on the other hand draw boxes around the solution space. Notice that the properties may include incorrect solutions. While this may seem as a defect to property driven design, it is precisely this simplification that makes properties resilient to refactoring and maintenance cycles. While still providing value by excluding out of bounds results. This resilience is draws from PDD’s lineage as a black-box testing method. Conversely, structured testing is a whitebox method that looks as what test data will induce 100% block coverage. As the code changes over time, the predicates and conditionals change which intern influence the code coverage. In a sense the points in the correct solution place are always moving around. The Example based tests are tightly coupled to the implementation they are attempting to verify. Properties however operate at a higher level of abstraction. Properties allow one to say “solutions of approximately this form are likely correct.” Properties then may make successively tighter bounds around the solution space to constraint the design. Its a powerful technique that I increasingly enjoy in my design work.

The term measure used in this problem statement means as the ancient Greeks meant it: a line segment which describes an integer number of divisions of another line segment. Today we might use the word greatest common divisor.

Inspired by test-driven-design we’ll start by defining a property for our maximum function.

Using the autocheck library we can express this requirement as follows:

Lets breakdown the definition of the arbitrary generator:

The signature of an arbitrary generator is best read bottom to top. The first step generates a random vector of random length. The line above it throws away vectors who’s size is equal to zero. We will see later how to generate data that meets our requirements, but sometimes its easier to just throw away some data rather than try to generate only valid data.

With this property we can test our stub function:

This generates a failed output as we expected

Now that we are confident the test machinery is working, we can remove our stub implementation and provide a (hopefully correct) definition.

We will no re-run our test to verify the implementation.

This demonstrates another useful property of properties :-). The data passing through our property is randomly generated, ergo each time the test runs we execute different tests. Typing make test multiple times is actually useful, not just something you do to procrastinate at 4:45pm when you’ve found a new bug.

Also there is something viscerally satisfying about writing a single property and seeing 100 tests passing.

Since C++ is a statically typed language this property may appear to be self evident. However this demonstrates another benefit of property driven design. We can document that we intend to only work with rational numbers. Then since C++ is statically type we can validate the property statically, and any maintenance programmer will fail to compile without modifying the test.

We can express this property as so

This shows another pattern of testing I picked up from Bruce Tate, tests should be named as a should-statement. This property here says: My property for maximum should give rational numbers. If this is ever falsified our test the static_assert() will fail compilation.

We can add another property that demonstrates the blackbox nature of property testing.

2. The value (maximum xs) occurs in the list xs

Properties as basic as this seem silly at first, but they serve a very useful purpose. Recall the poorly drawn graphic from above. We are searching for bugs in our program by defining bounds around the solution space. This property states something very profound about our function. The output of our function is dependent on the input. This trends the function toward referential transparency. At a more basic level though, this might be a property one starts with. Notice that if we implemented this property first, with our stub function in place, our random generator would have falsified it easily with any list where 0 was not a member.

We can express this property with autocheck as:

Simply put, if minmax::maximum returns some value m, that value must be present in the list. Notice again that m may be the minimum value in the list. This property isn’t checking for the complete correctness of the function. It is testing one small aspect of the function’s possible solution space.

Next we can move on to our next function, minimum_pair, which we can implement with a stub to always return the first element:

To property test this function we’ll need to teach autocheck how to generate a measure_pair_t. We do this by specializing the generator function in the autocheck namespace.

Now autocheck can generate and display our specific type. Setup a property to check.

4. If xs is a non-empty true-list of measure pairs, then (minimum-pair xs) is a measure-pair.

To express this property we must first have a definition of a measure pair (We’ll see how this definition is not quite correct, but our properties will sus that out quite quickly):

And our property to check that the return value from minimum pair should meet the definition of a measure pair.

Executing this gives us, as expected due to our stub, a falsifiable case.

Error 0xc0000094 is a divide by zero. Ah! Good catch autocheck. I know I personally would not have exercised this using a directed test. This is another strength of random testing. The random generators are not biased with programmer intuition. Our requirements state that a measure-pair is always non-zero so we will update the generator to exclude zero values.

This test case demonstrates that our understand of the word measure wasn’t quite right when we implemented the is_measure_pair predicate. A value can always be a measure of itself, i.e., a number always measures itself one time. Since our function is still a stub we are still excercising the test machinery, not the production code yet. One school of thought is that we are wasting time writing, and rewriting, test code before we’ve even worked on the code we’re getting paid to write however, this failing test case is evidence for a different perspective. The test code is letting us explore the problem space.

Imagine a traditional directed test scenerio. We unknowingly have a limited understanding of the problem space. We implement some tests. Those tests reflect our understanding of the problem. We then implement the functions. The tests pass, all the while we unknowingly provided weak tests for the given problem domain. Lastly, we inspect the implementation and add some additional tests to assure 100% code coverage.

In this scenerio, we did TDD correctly by writing the tests first. We did our red/green refactor. We implemented the function. Our tests pass, and we achieved 100% code coverage. We did all the things we are supposed to do, and we still delivered a defective function. The problem is that all these steps happen at the same conceptual level of abstraction. It’s a linear prorgession from our understanding, to writing tests, to writing implementation, to inspecting coverage. At no point was there some outside force that can excercise the code beyond our understanding. This is the benefit of property-driven-design. Randomness will generate test cases you the programmer didn’t think of. You the programmer then need to classify that generated test case as valid input or invalid input. That is a useful! It expands your own understanding.

John Hughes put it best when he state that property testing is about comparing the specification to the code. The properties encode the specification. The code does what it does. When the checker finds a discrepancy it is the engineer’s job to find where the defect lies. This is very powerful. We, the engineer, aren’t relegated to imagining test data for our functions what will make it blow up. We simply describe concepts (properties) of what we believe the specification is telling us to do. Then we implement the code. If the two match then we the code probably matches the specification. Its raises our level of thinking out of individual numbers, and code paths to more abstract thinking, which is something humans do best.

The problem is is that our definition doesn’t include self-measures. We can adjust it easily.

We can run it again to see if we get a different case:

This is awesome! Our failing test case is bigger now. Again to quote John Hughes, “This is progress! We are now passing for lists of size 1!” Our function is still implemented as a stub, so we can have some confidence that our test code is behaving properly. Let’s implement our minimum_pair function:

So a few real-world metrics. I wrote this code in 3 hours. The requirements were relatively simple, but I suspect that using example tests would have resulted in a similar completion time. Additionally, I suspect, my directed tests would have found more defects near the end of my development rather than the beginning. I felt this affect as an acceleration. I found feel as I closed each property that I had fewer defects in the code I previously thought was done. This is a big confidence booster in my opinion. Additionally, another pattern I learned from John Hughes, that I didn’t explicitly describe here but you can see in the code, save failed tests. A failing test is gold! When the random generator uncovers something interesting save it as a directed test. Then fix the failure and leave the directed test behind. It will be a reminder of a corner case you missed. Plus some developers like to see examples tests, even random ones.

In this post I walked through a property-driven-design approach to a simple numerical problem. In intended to show something more interesting that the reverse(reverse(list)) == list example, and something less contrived than my previous post on property testing. I look forward to any feedback on this post.