Why is bool one byte: Wasting space to save time

Boolean carries 1 bit of information. The canonical example of binary, On/Off, True/False. Yet, the bool type in C and C++ is 1 byte large, 8 bits of information. Carrying thus $$2^8 = 256$$ representable values. This may not sound like much, but consider an array of bools (a common misunderstanding beginning C++ students make trying to formulate a bit-field): bool fatBitField[8]

This wasted space however has a useful purpose. It a common reason in many optimizations we make in data structures, we trade space for time. In this instance we’re trading space for a hardware design principle, addressable memory.

x86 based machines and most microprocessors except for some uniquely specialized Digital Signal Processors (DSPs) 1 byte addressable. Thus if you wanted to make a bit-field, to pack bools as tight as possible, how would you do so?

How do you mutate a single bit in C?

Plug this into Compiler Explorer 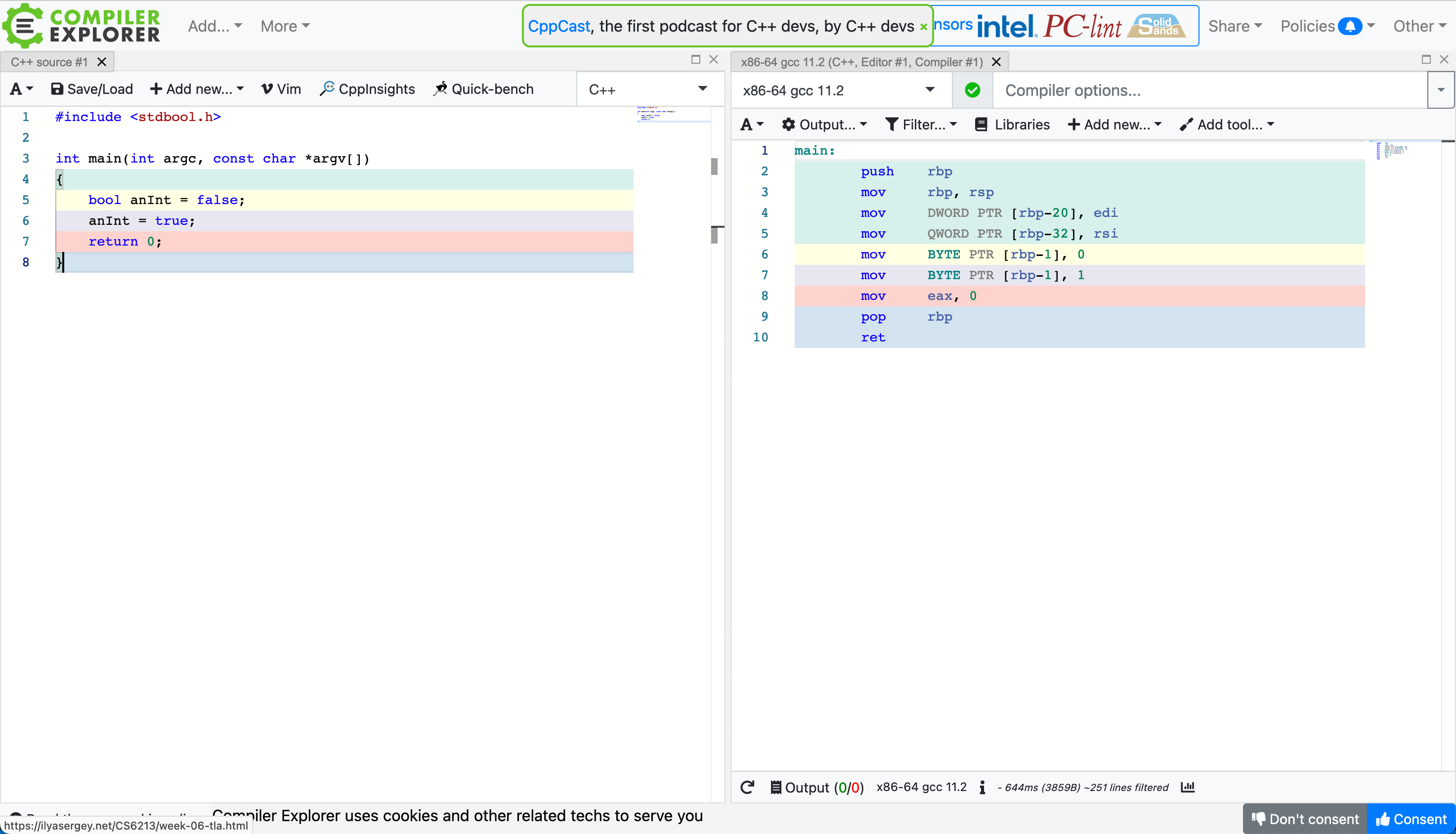 We can see the source lines 5, and 6 correspond to just two instructions, lines 6 and 7 in in the output assembly.

Let’s compare this, the simplest case to manual bit masking 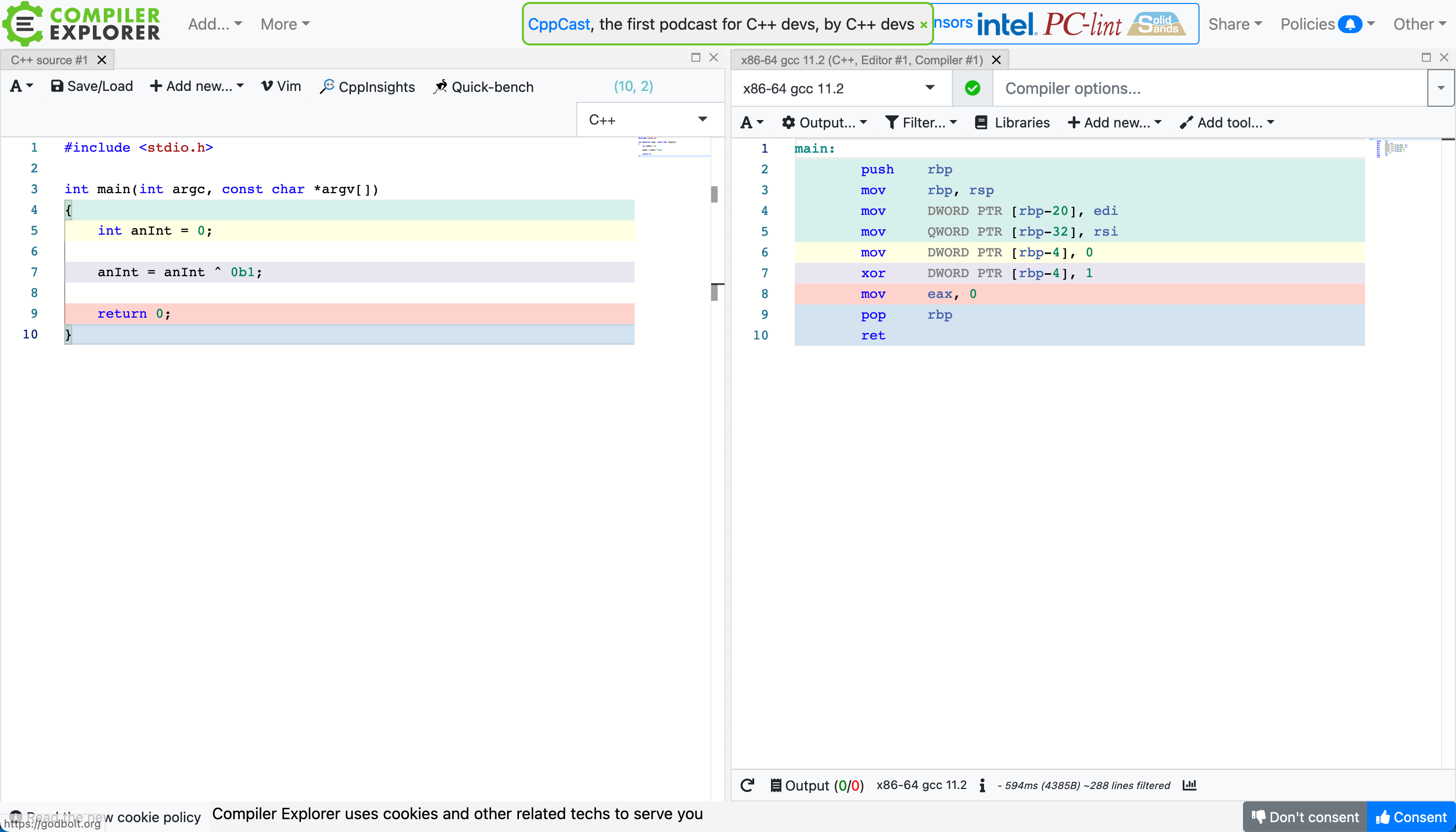 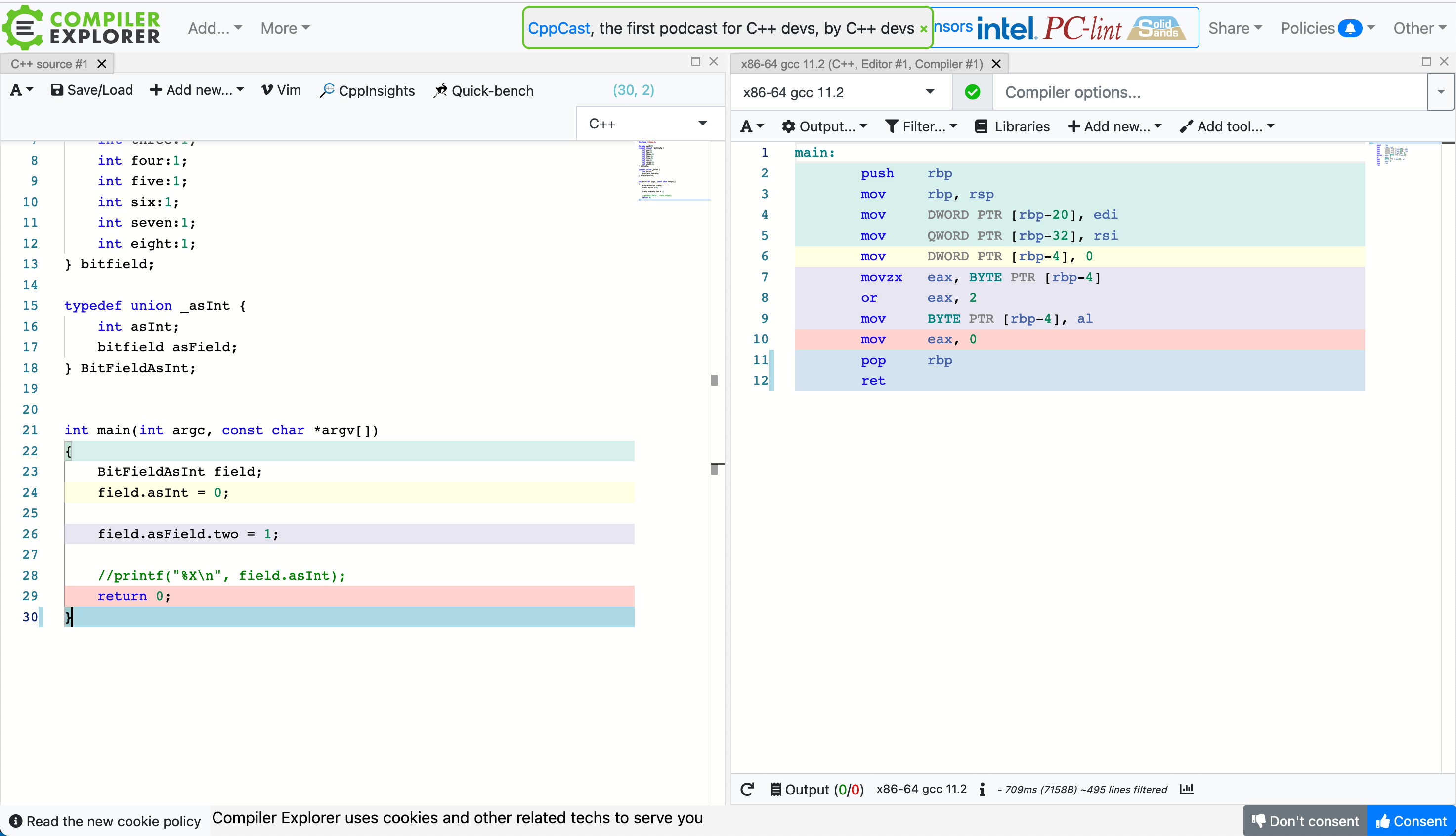 Well, why isn’t the computer bit addressable then?

The short answer, bit access isn’t that common, thus the hardware is optimized for the more common access of bytes. Although due to various levels of cache and the time required to pull objects from different levels of the memory hierarchy (e.g. CPU caches, Main Memory, Durable Storage, Network, etc), multiple blocks of memory are pulled at a time.

A related question is “what does 64-bit computing mean?” 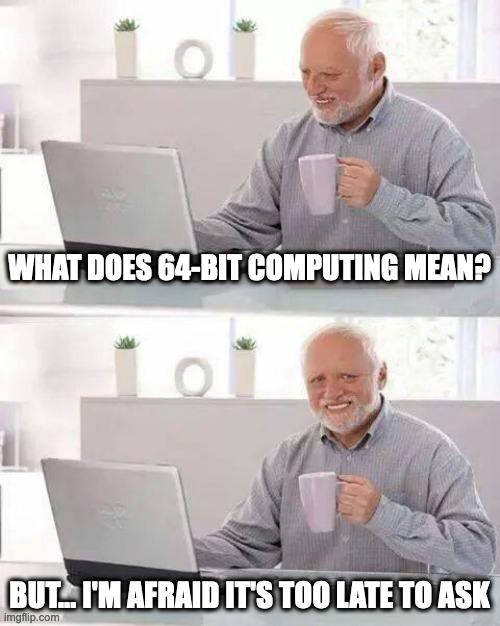 Now consider that bool by default stored only 1 bit (instead of a byte). The apocryphal story of “…640KB is enough for everybody…”3 is also related to this point…addressable memory.

You may remember when 32-bit addresses were common. Before that computers were 16-bit and even 8-bit addressable. Many microcontrollers (the things that make your fridge and oven work) are still 8-bit. It’s all that needed for those use cases. What this means that given an memory address, how many bytes will be pulled from main memory? This is a hardware level concept. Literally there are ~64 individual wires on the board. These wires signal a stream of bits 0b0111010101... to the RAM. The RAM returns the values represented by that address.

Thus, the maximum amount of addressable memory is bounded by the size of the address. In 32 bits, this was 4GB.

If instead we decided that each address represented a single bit, in order to get even 4 GB from our 32-bit computing days we’d need CPUs with 35-bit computers

Thus making a bit addressable memory, requires more hardware. However are those resources worthwhile? It’s all about access patterns. How is most memory utilized? Again it largely depends on the domain, which is why some processors have special addressing modes. However on most computing, we want to fetch large blocks of time to amortize the cost of fetching from the next level in the memory cache. “Paying” the time to fetch from the next physical location with wasteful for single bits.